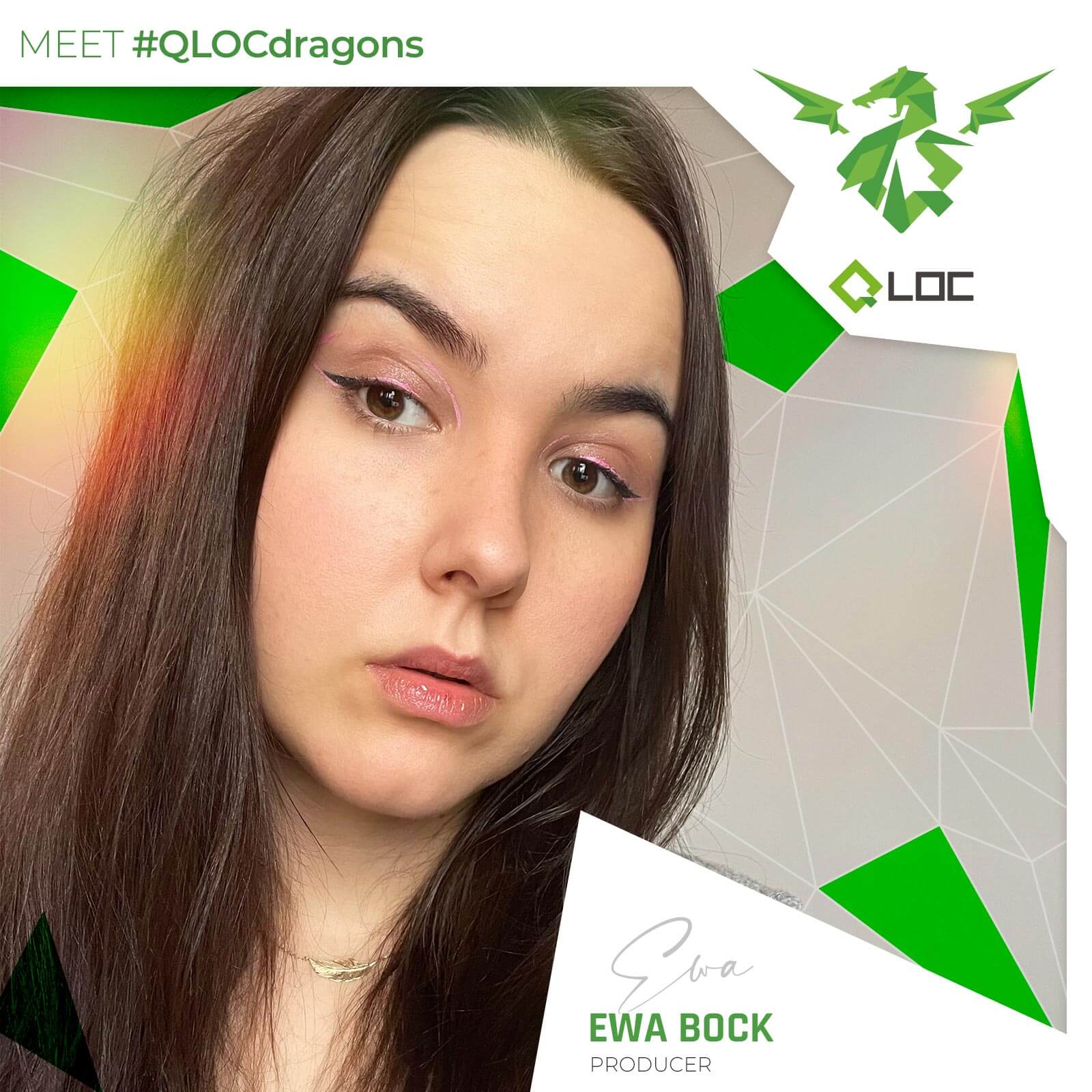 Meet Ewa Bock, who is our Producer.

We asked Ewa some questions about her work at QLOC and more!

Check out her answers below.

I’m what’s called a Producer in DEV. My day to day responsibilities involve managing a team of programmers; making sure that work can proceed smoothly, and be delivered on time. I spend a lot of time in Jira and Excel and sometimes simply online, looking for the freshest meme I can send my team after our Daily.

Probably the process of releasing the project out into the wild. Don’t get me wrong, it’s super stressful, especially in a position where your own mistake can break something for the players. Still, some of my favorite memories from work are from release days, where the whole team would look for initial player impressions and see how we’ve done.

Anything where we get to work alongside a client’s team – so not a specific task, but moreso the experience of co-dev itself. It’s been super interesting to get a glimpse of a different dev studio’s culture from the inside and join their forces on a project.

Twelve, if my memory serves me right. Some were in QA, others in DEV, but the one thing they all have in common are some damn good memories.

That keeping a task to yourself rarely pays off – no matter if you’re stuck at the beginning, or making the very last adjustments, it’s always beneficial to consult with the team.

That passion for gaming is sometimes just as important as qualifications – you may have the best resume, but if you know nothing about the industry from a gamer’s perspective, you might want to take some time to catch up. 😉

I have some true nostalgia for Batman: Arkham Knight. I still know some of the Gotham City districts better than the ones in Warsaw.

I’ve been told I have a rather intense death stare, which can be useful in my line of work. Sadly, it doesn’t work as well over webcams. 🙁

Lately, I’ve been busy making my first apartment into a home. It has also turned me into a bit of a plant nerd – I’ve discovered that Calatheas and Maranthas make for some really great decorations. Other than that, I love listening to audiobooks while playing Teamfight Tactics. I’m a true multitasker at heart.

I play for both teams. 😉

I hate playing favorites, I have full lists for all of these. So, here are some examples: game – Horizon Zero Dawn, movie – Death Becomes Her, series – Buffy the Vampire Slayer, book – “Nothing to See Here” by Kevin Wilson.

Definitely a Nintendo Switch game, I’d need something portable! Actually, I’d cheat a bit and pre-load the console with Stardew Valley, Don’t Starve, and Hades. You know, for comfort, inspiration, and entertainment, respectively. 😉

Are you trying to break my NDA?