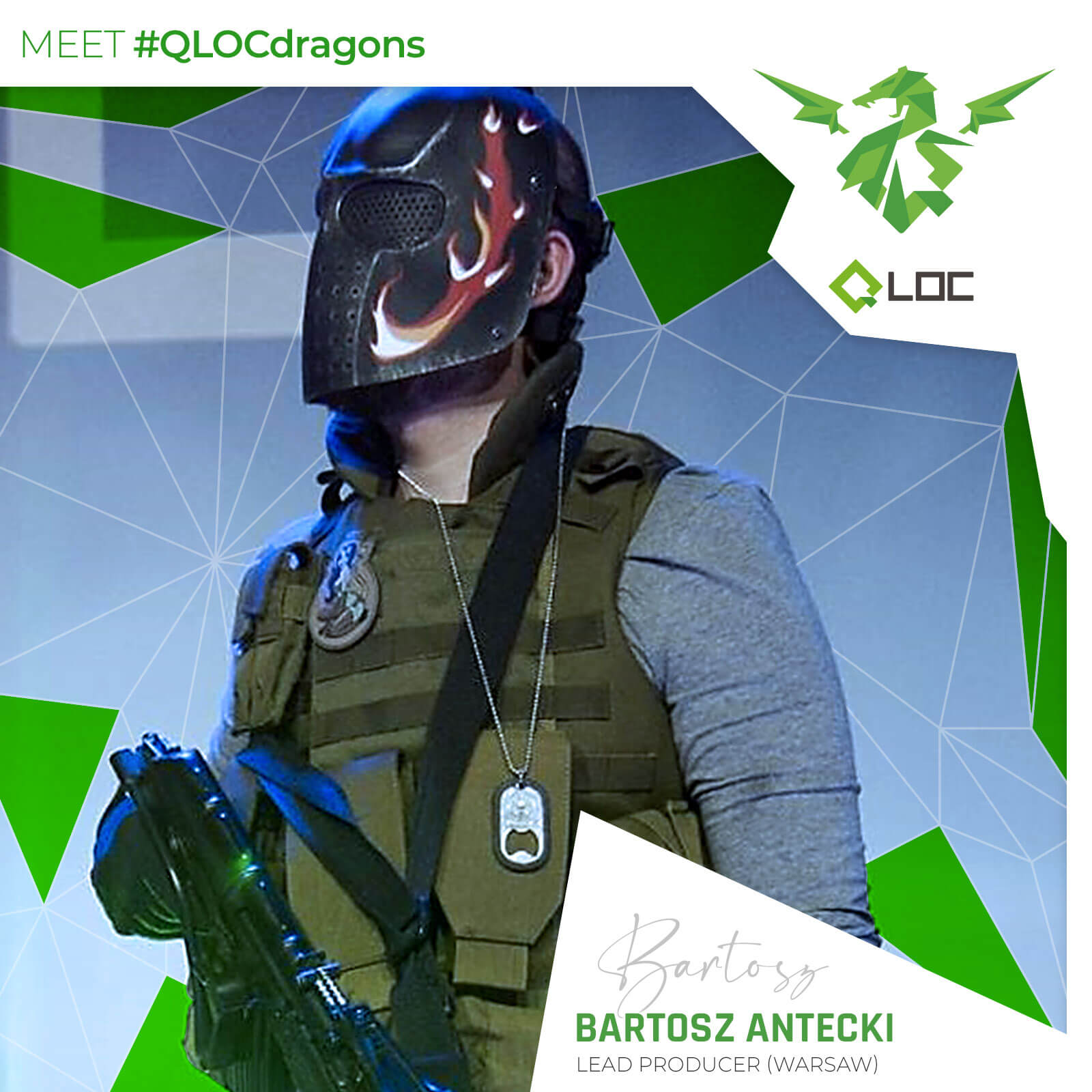 Meet Bartosz “Banteki” Antecki, who is our Lead Producer (Warsaw).

We asked Bartosz some questions about his work at QLOC and more!

Currently, I oversee the day to day operations of the Warsaw branch of our development department and take an active role in larger projects. This involves planning teams, allocating various resources and budgeting project and department costs among a larger plethora of tasks.

I’ve always wanted to work in the industry in one capacity or another. QLOC and the people that work here gave me the opportunity to try my strengths at a large portion of the roles that are involved in the game development process. In other words, I like the opportunities to grow offered by QLOC.

As I’ve done quite a bit of island-hopping through roles and departments, I gotta say that I’ve always had something new and captivating to work on at QLOC. It’s hard to pinpoint what was the most interesting task I’ve ever had to do.

Between my time in QA and our Development department – a lot. There are too many to list here, but the projects that I remember the most fondly or vividly include Devil May Cry, Dust Force and THPS 1+2.

I’ve learned that where there’s a will there’s a way and that success is always achieved by a team effort. On various occasions it was the sheer determination and ambition of all those involved in a project that made the seemingly impossible possible.

Go for it. It’s a great place to work where you’ll get to meet lots of fun and interesting people. There are quite a few guys and gals that have returned to work here multiple times, including myself, and I believe that speaks volumes about QLOC as an employer.

There were two projects that I had the pleasure of working on at QLOC that were dreams come true for me. These were Homeworld Remastered and THPS 1+2. My 17-year-old self would not believe me if I told him he’d be working on these remasters.

I anticipate and plan ahead better than I give myself credit for? Does that count? Basically I do things on autopilot and then am surprised that I took steps to mitigate an issue before it became a problem. It’s reaching a point where I think I should be writing notes to my future self “Don’t worry, I gotcha fam.”

Nowadays, with work and fatherhood, spare time is a valuable commodity, but when I do have some I partake in the hallmark activities of contemporary nerd culture – video games, painting little plastic soldiers and playing tabletop wargames, Airsoft, and collecting LEGO. The LEGO part of my hobbies is something that my son enjoys the most by far.

Were you to ask around at QLOC you’d hear that I’m a die-hard PC Master Race proponent. However, nowadays I divide my gaming time between all platforms according to genre. Third-person action games – definitely on consoles. First-person shooters – only on PC for me. I fell into that weird generational gap where I never really learned to aim on a controller.

Favorite game(s) – the Company of Heroes series. In CoH1, if I remember correctly, me and my teammate reached top 15 2v2 in the world. Favorite movie – Aliens or Platoon. Favorite book(s) – military sci-fi, the more science and less fiction the better.

My nickname at work is Banteki and it has been for more than a decade. It has stuck to me to such a degree that there exist individuals that do not know my actual name. It all started when an Italian language tester named Luca called out to me thinking it was my name. He’d just received an email from me, from bantecki.